The Joy of Jugs 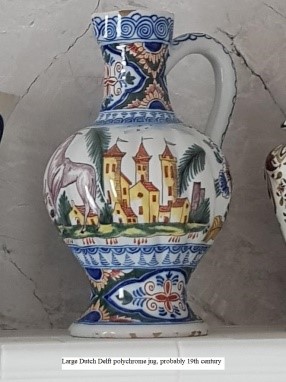 The Joy of Jugs

One of the best things about social media – or some people might say one of the only good things about social media – is that it encourages groups of like-minded people from all sections of the community and all geographical areas to make contact with each other in order to discuss topics of interest to them. Others, of course, think this is a bad thing and not a good thing, because there might be no effective editing or oversight of the topics of interest – so it might be as easy to set up and run an interest group about bomb-making or safe-cracking as it is to have one about a more innocent and less controversial subject.

And what subject could be more innocent and less controversial than the collecting and study of ceramics? Facebook hosts several groups of this kind, and by and large they are civilised and friendly places to spend leisure and learning time. In recent years they have transformed the hobby of collecting ceramics (and also most other classes of antiques and collectables), by making the identification, study and procurement of your favourite objects so much more interesting, enjoyable and accessible.

A particular favourite of mine is the Facebook British Studio Pottery Collectors’ Group, to be found at www.facebook.com/groups/BritishStudioPottery/. This group currently has more than 5,000 members, including a number of stunningly knowledgeable experts, a contingent of keen collectors (like me), several practising potters, some dealers and auctioneers, and many others who look in on the discussions but are less participative. If you’re not a fan of studio pottery (and I concede that it is far from being a majority taste), then there are several other ceramic interest groups that you can join. Here’s a selection:

The typical Facebook special interest group tends to have several hard-working volunteer administrators, who strive, usually successfully, to keep the conversations polite, helpful and relevant, to exclude spammers, and to resolve the occasional spat which can so easily break out between members with differing views. But you know this already – chances are that you have come to this blog via Steve Osborn’s highly successful Talking Antiques group which currently has some 73,000 members.

But whereas Talking Antiques is more for the generalist and novice collector or dealer, the specialist interest groups can be very specialised indeed. Often, their members include world-class collectors and researchers, who put up detailed posts about wonderful objects from their collections – but who are also very willing to share their expertise with beginners and interested amateurs.

Ceramics is a wonderful area for collecting because pots are available in such vast quantities and such enormous variety. Many types of pottery and porcelain are still quite cheap to buy, while many other classes of art and craft objects are no longer affordable to the average collector. Which means that even on a modest budget you can easily form your own distinctive and individual collection of pieces that appeal to you. Ceramics are easy to keep and colourful to display.  In just about any antique shop or charity shop or sale or auction you can find pots in an infinite number of styles, plain and fancy, produced over hundreds or even thousands of years. They are durable and imperishable – except when they get broken, from which moment they become shards and acquire an archaeological appeal to a whole different type of collector. Most ceramics are well-documented, and are perfect subjects for study. And there’s a bonus – often you can get extra pleasure from your lovely collector’s items by using them as vessels for eating and drinking.

One of the most appealing features of some Facebook interest groups is that every so often a member might suggest a topic for the day, which is then taken up more or less enthusiastically by other members who post pictures of items from their collections which match the topic. Today, as I write this paragraph, it’s Teapot Tuesday. A week or two ago there was a Saltglaze Saturday.  And a Transferware Thursday.  There’s a slight bias against topics which don’t alliterate with the first letter of a day of the week, but it’s still fun.

Recently, on one of the groups (as it happened, the Studio Pottery Group), the suggested topic was Jugs. Or pitchers, if you will. Or ewers. Whatever you wish to call them, the response was extraordinary, with many more members than usual piling in with photos of single jugs, shelves full of jugs, rooms full of jugs. Indeed, so many members responded, so many more than answer calls to show other types of object, that I thought it safe to conclude that of all forms of ceramics, the jug form is by some way the favourite of collectors. As usual with my conclusions, it was entirely unsupported by empirical evidence – so I hereby appeal to readers of this blog who are also ceramics collectors to resolve the issue by answering the following questions:

What is your favourite form of ceramic object? Is it by any chance the Jug? My own answers to these questions would be affirmative. If you have read my book Random Treasure: Antiques, Auctions and Alchemy, you’ll already know this, because one of the two objects examined most closely in the book is a very special jug made in 1926 at St Ives Pottery, Cornwall by the legendary potters Bernard Leach and Michael Cardew.

Responding enthusiastically to the Studio Pottery Group’s flurry of jug-centred activity, I posted images of two arrangements, each of eleven jugs, or 22 jugs in total. This number, I confess somewhat sheepishly, comprises only a small proportion of my entire collection of jugs.

So what is it with Jugs? Why do we ceramics collectors (and for all I know, silver and gold and metalware and woodware and glassware and Tupperware collectors too) get so excited about Jugs? After all, other types and shapes of vessel are available – plates, bowls, lidded jars, teapots, cups and saucers, mugs, tankards, cooking-pots, boxes, vases. What’s so special about Jugs? Here are half-a-dozen conjectural explanations:

To finish, I’m showing a small selection of jugs from my collection. They are all British or European, representing some 300 years of production, but none of high value.  There’s a tall jug, a small squat jug, a huge jug, a tiny jug, a plain jug, a plainer jug, a colourful jug, a round jug, a straight jug, a Doulton jug, a pearlware jug, a Meissen jug, a puzzle jug, a dog jug, a face jug, a hunting jug, a Dutch Delft jug, a Scottish majolica jug, a German tin-glaze jug, a country jug, a harvest jug, a glass ewer, a slipware jug, some milk jugs, a stoneware jug, a porcelain jug, my favourite jug (broken and repaired, but so special to me that it has its own section in Random Treasure), and a jug so ugly that it’s beautiful.

Readers will note that the selection includes some recently-made jugs which do not qualify as antiques. But it is my sincere hope that any purists who may feel that these objects have no place on the Talking Antiques blog will grant me a little latitude, and join with me in heartily celebrating the joy of jugs! I’m Roger Stewart, a long-time collector and occasional dealer in antiques, artworks and other lovely things. I make most of my finds in local auctions and second hand shops near my home in Edinburgh, the beautiful capital city of Scotland.  I like to write about objects that I collect and (sometimes) sell, and you can find stories about some very remarkable items in my book Random Treasure – Antiques, Auctions and Alchemy, available from online booksellers including Amazon at tinyurl.com/y7j7lsys, and in my blog at www.random-treasure.com .