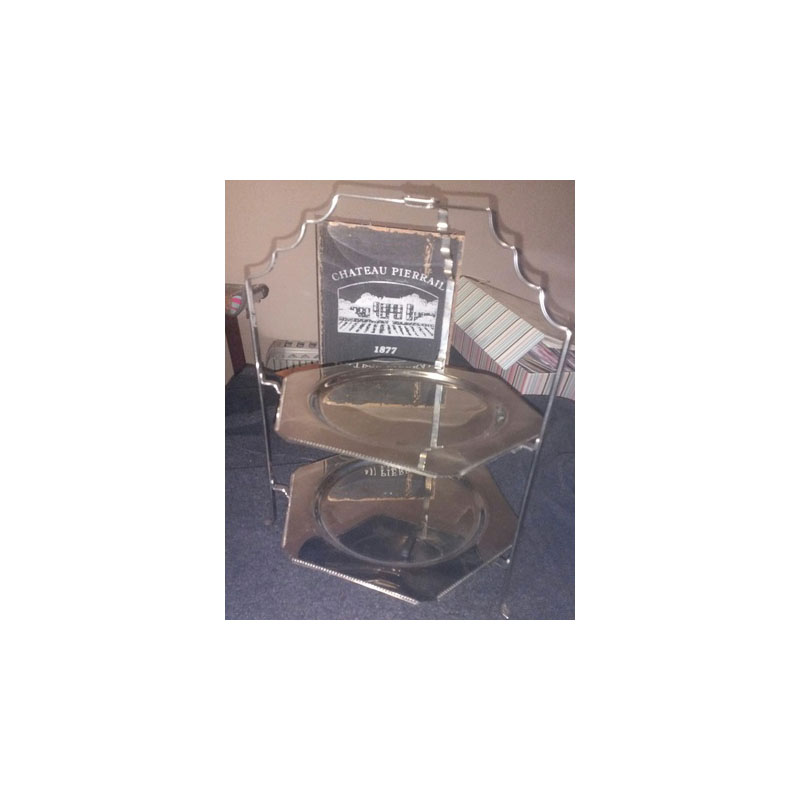 The Wiggin Family,  James Thomas Wiggin and his eldest son James Enoch (hence the name J&J Wiggin). Way back when they decided to move into a Salvation Army Mission Hall, known as “The Old Hall” when their stable at their home become too small, possibly never considered in the great age of the internet that their legend would live on.

Old Hall and other companies, like Bramah created a style in stainless products which was practical useful, sometimes creating a product which was very attractive, considering it was stainless steel  For Old Hall the company lasted from from the 1904 to the 1980s . Dare I say and I’m not being a traitor but some of the Danish stuff is superb!

So what is stainless steel. In metallurgy, stainless steel, also known as inox steel or inox from Frenchinoxydable (inoxidizable), is a steel alloy with a minimum of 10.5%[1] chromiumcontent by mass.

Stainless steel is notable for its corrosion resistance, and it is widely used for food handling and cutlery among many other applications.

Stainless steel is used for corrosion-resistant tools such as this nutcracker.

Stainless steel does not readily corrode, rust or stain with water as ordinary steel does. However, it is not fully stain-proof in low-oxygen, high-salinity, or poor air-circulation environments.[2]

There are various grades and surface finishes of stainless steel to suit the environment the alloy must endure. Stainless steel is used where both the properties of steel and corrosion resistance are required.

And so back to Old Hall. I will mention a gentleman by the name of Robert Welch, a designer later in this chapter yes.  There is an Old Hall Club, I’m not a member as yet and yesmad people like me collect it….I’m really not the only one honest! But first the difference between Olde Hall and Old Hall back stamps

The original trade mark, registered in 1922 for a range of bathroom fittings, was known “Olde Hall” and this was displayed on these products as a trade mark “Olde Hall” This continued on tableware when production began in 1928.  In 1934, a new trade mark of “Ye Olde Hall Quality” was introduced in conjunction with a drawing of an Old Hall on all company literature but this had to be withdrawn the following year when it was deemed that this combination was too similar to a trade mark already being used by the Sheffield cutlery manufacturers Walker & Hall; so, in 1935, the trade mark reverted to just the words “Olde Hall”.  This continued until 1959 when, to present a more modern image, the “e” was dropped to become Old Hall and this remained in use until the company closed down in 1984.  The first two trade marks, from 1928 until 1935, are becoming increasingly collectable! The most collectable of the Old Hall products was designed by a gentleman and legend Mr R Welch but we’ve yet to get to his story. “Staybrite” was the trade name given to 18/8 stainless steel (i.e. 18% chromium, 8% nickel) in 1924 by steelmakers Thomas Firth of Sheffield when they began to publicise this remarkable material that had been discovered, by chance, by their metallurgist Harry Brearley in 1913 and further developed by his successor Dr W H Hatfield.  This was the steel used by Old Hall when tableware production began in 1928 and, in addition to being marked Olde Hall, all pre-war items were also marked “Staybrite” (or “Firth Staybrite”).  After the war, Old Hall changed the wording of “Staybrite” (or “Firth Staybrite”) to “Stainless Steel” and later, in 1959, to coincide with the dropping of the “e” on Olde, 18/8 was added in front of “Stainless Steel.

Anything less than 18/8 in my opinion is tin foil ewww.! It is possible to go on the Old Hall Club Website and find a copy of a post in Punch Magazine The booklet “An Adventure in Staybrite” by “A Married Man” (namely Mr William Wiggin) and illustrated by Mr Leo Dowd, one of the leading artists of the “Punch” magazine, has been reprinted in exactly its original format for the Old Hall Club.

And now the Old Hall relationship with Robert Welch who was appointed Consultant Designer to the company in 1955 on completion of his studies at the Royal College of Art.  Prior to this, virtually all designs had been done by the Wiggin family, mainly by Leslie and Wilfred Wiggin.  The marriage between J&J Wiggin and Robert Welch brought world acclaim with most items designed by Robert Welch carrying his name on the logo.  Robert died in March 2000, aged 70.

Robert’s name lives on I found cutlery in a fancy expensive restaurant some years ago but it was modern and not Old Hall, but it wasn’t all bad as it was stainless steel.

Collectors really like R Welch products and so do I, so please if you are kicking back with a cuppa don’t spill the contents on yourself as up you turn it over looking for the maker and looking for the legend!

By Andrew McNamara. You can find Andrew on Facebook