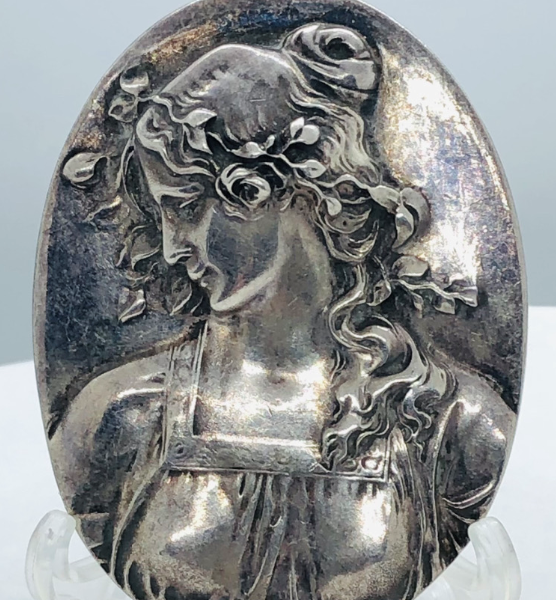 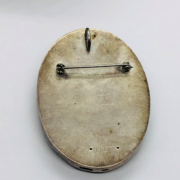 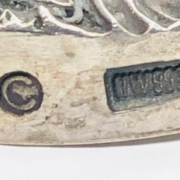 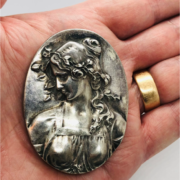 Henryk Winograd was one of the world’s greatest silversmiths.
This pendant is made from 99.9% silver as hallmarked .
Henryk Winograd was one of the world’s greatest 20th Century masters of traditional silversmithing techniques (he recently passed away in his 90’s) and was the leading practitioner in America of the historic art of Repousse. He was born in Poland, of Russian parentage, from a lineage of silversmiths to the Czar. He was trained as a silversmith in Poland and, after serving in the military for several years, he came to the United States in the 1970’s. In just a few short years, his works of art found their way into the hearts of serious collectors as well as casual enthusiasts. Mr. Winograd used the art of repousse and each one of his pieces was designed by hammering pure silver sheets into crafted molds. Winograd rarely worked in sterling (which is only 92.5% pure), but preferred the purest form of silver available (99.9% pure silver). As true art forms, his designs have a sharp, high relief. The delicacy of the detail of his work is superb and the quality of his execution is breath taking. The process requires great talent, patience and dedicated attention to detail. Henryk Winograd recently passed away – he was in his nineties. We were fortunate that his talent was able to create incredible small masterpieces in pure silver until the very last years of his life. Each Winograd piece is unique and is signed and copywritten. Further, each of his works of art is marked with the characteristic Winograd hallmark — “HW999”, which is a combination of his initials and the silver content of the work — 99.9% silver (considered to be pure silver). Winograd’s silver works of art are getting harder and harder to find on the open market as they have been collected worldwide for over 60 years! It’s likely his work will grow more valuable since his passing. His work is always of museum quality and, in fact, his work graces many museums throughout the world. Winograd has created silver plaques of every major Civil War battle — these are generally valued at well over $1000 each. His miniatures easily bring amounts exceeding $500. Winograd is also known worldwide for his Judaica images. He copied some of the best known Judaica paintings into pure silver forms which are considered to be masterpieces and are among his best loved works.Email steveosbornocs@hotmail.com