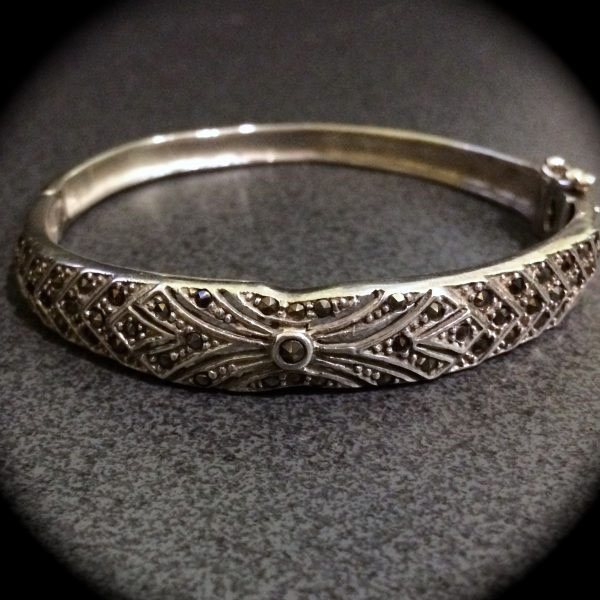 When I was in my teens I had a great love of long dangly earrings with multiple tiny little flecks of understated sparkle. Those tiny little specks were pyrite set into silver (called marcasite jewellery).
Those earrings carried me through into my early adulthood. I wore them with jeans, casual wear, and I wore them out in the evening with my little black dress.
I hardly wear silver anymore, but prefer gold. That doesn’t stop my interest in stylish marcasite jewellery, and collecting special pieces. And when I’m particularly lucky I find the odd piece of jewellery with a base of gold but has the marcasite/pyrite set in silver. Lovely! Marcasite jewellery, along side mourning jewellery, was made popular by Queen Victoria after her husband died. Whilst she was in mourning, she believed that it was more appropriate for less shiny and sparkly jewellery to be worn. Less ostentatious jewellery was more acceptable. Marcasite jewellery has a lovely sparkle, but compared to diamonds it really is understated. As marcasites were far less costly than diamonds, this type of jewellery became accessible to most people, and very fashionable.

In the Art Deco period the designs in this jewellery changed dramatically, going from the flowing designs of Art Nouveau to the geometric style of the Deco period.

Along with the industrial age came a change to the way marcasite jewellery was created. More often than not, it was made with machines. No longer was this jewellery being made by hand using thin sheets of silver, and the individual marcasites prong set or bead set. Now the pieces could have the little gems glued in, but little dots of silver were placed alongside to give the illusion of belonging to the gem setting.

Marcasite jewellery is still very collectible today, and is easily reproduced. If you’re lucky enough to see an old hand made piece along side a new piece today you’ll be able to see the difference in manufacture.
There is nothing wrong with copies of a lovely style, but honesty should go with the sale, and it be priced accordingly.
Now a little clarification here; marcasite jewellery is actually made with pyrite, and not marcasite. Both pyrite and marcasite have the same chemical composition of Fe2, iron disulphide. However, they form with different crystal structures, pyrite is cubic, and marcasite orthorhombic. Pyrite, often referred to as fools gold due to it being found near gold, has a metallic lustre and has a pale brassy yellow appearance. Marcasite is lighter and more brittle than pyrite, and is found near tin and breaks up more readily. Actual marcasite crystal is susceptible to what is called pyrite decay, it will slowly disintegrate into a white powder. If you see this, please remove the jewellery piece so that the pyrite decay does not spread to other pieces of jewellery.

I have often read not to put glued marcasite jewellery into water as it weakens the glue. Whether correct or not, I can’t say for sure. But if you are lucky enough to have a precious genuine piece of antique marcasite jewellery please take good care of it. A gentle polish with a polishing cloth should be enough. Enjoy.

Oh, and my delicious long dangly sparkly earrings were handed down to my beautiful daughter who loves them too. Marcasite really does span the ages!